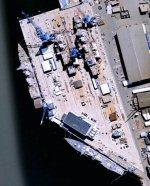 Bath Iron Works (BIW) is a major American shipyard located on the Kennebec River in Bath, Maine. Since its founding in 1884 (as Bath Iron Works, Limited), BIW has built private, commercial and military vessels, most of which have been ordered by the United States Navy. The shipyard has built and sometimes designed battleships, frigates, cruisers and destroyers, including the Arleigh Burke class, which are among the world’s most advanced surface warships.

Since 1995, Bath Iron Works has been a subsidiary of General Dynamics, the fifth-largest defense contractor in the world (as of 2008). During World War II, ships built at BIW were considered to be of superior toughness, giving rise to the phrase “Bath-built is best-built.”

The Arleigh Burke class of guided missile destroyers (DDGs) is the first destroyer of the United States Navy built around the Aegis combat system and the SPY-1D multi-function phased array radar. The first ship was commissioned on 4 July 1991. After the decommissioning of the last Spruance-class destroyer, USS Cushing, on September 21, 2005, the Arleigh Burke class ships became the U.S. Navy’s only active destroyers and the class has the longest production run for any US Navy surface combatant.