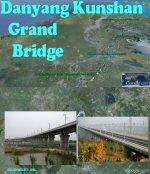 About the “Danyang Kunshan Grand Bridge tour”:
See the start and end of the very long brigde, including current and historic placemarks along the brigde. Included is detailed tracks composed from various sources to show the current most precise path of the entire bridge, included a pre and post path at the start and end of the brigde. The tracks/path are at 33m/99ft level above ground to let you do a play track with a view from a bit above ground. Consider adjusting the GE ‘Camera tilt angle’ to 80 degrees or above, in ‘tools, options…, touring’, for better display when playing tracks/paths. Enjoy! Tour creator: Tom Kjeldsen, created july 2011. Recommended to be viewed as a ‘Play tour’ in Google Earth with terrain feature enabled.

***** This file is also available and downloadable at ge.dooley.dk and at GEC – Have a nice google earth tour… Let’s explore!