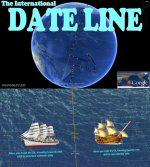 The International Date Line (IDL) is an imaginary line on the surface of the earth opposite the prime meridian where the date will change as one travels east or west across it. Roughly along 180° longitude, the anti meridian, with diversions to pass around some territories and island groups, it mostly corresponds to the time zone boundary separating +12 and -12 hours of Coordinated Universal Time (UTC) also known as Greenwich Mean Time (GMT). Crossing the IDL traveling east results in a day or approximately 24 hours being subtracted, and crossing towards west results in a day being added. The exact number of hours depends on the time zones.

The International Date Line can cause confusion among especially airline travelers. The most troublesome and odd situations usually occurs with short journeys from west to east. To travel from Tonga to (American) Samoa by air, for example, takes approximately two hours but involves crossing the International Date Line, causing passengers to arrive the day before they left. This often causes confusion in travel schedules, like hotel bookings unless those schedules quote times in UTC, but they typically do not since they must match domestic travel times, local transport, or meeting times.

The first date line problem occurred in association with the circumnavigation of the globe by Magellan’s expedition (1519-1522). The surviving crew returned to a Spanish stopover sure of the day of the week, as attested by various carefully maintained sailing logs. Nevertheless, those on land insisted the day was different. This phenomenon, now readily understandable, caused great excitement and confusion at the time, to the extent that a special delegation was sent to the Pope to explain this temporal oddity to him.

The effect of ignoring the date line is also seen in Jules Verne’s book “Around the World in Eighty Days”, in which the travelers, led by Phileas Fogg, return to London after a trip around the world, thinking that they have lost the bet that is the central premise of the story. Having traveled the direction opposite to the one taken by Magellan, they believe the date there to be one day later than it truly is.

If someone circumnavigate the globe in an airplane from east to west (the same direction as Magellan), they should subtract one hour for every 15° of longitude crossed, losing 24 hours for one circuit of the globe; but 24 hours are added the moment the International Date Line is crossed from east to west. The International Date Line must therefore be observed in conjunction with Earth’s time zones: the net adjustment to one’s watch is zero. If one crosses the date line at precisely midnight, going westward, one skips an entire day; while going eastward, one repeats the entire day.

When you travel from west to east and cross the IDL; Shift to the previous calendar date / set back your clock approximately 24 hours. When traveling from east to west; Shift to the next calendar day / set your clock approximately 24 hours forward when crossing the IDL. The date of where you are right now is rather well defined, also when you go back and forth across the Date Line as it depend solely on your geographically coordinates. Your current clock adjustment to local time is much more depending on local currently active or inactive agreements like daylight saving time of the location of where you currently come from and the destination you arrive to.

Because the agreed IDL do not follow the 180° longitude in the middle of the Pacific Ocean a kind of odd daily date situation occurs. For 2 hours every day, between 10:00 and 11:59 UTC, there exist 3 different weekdays concurrently. For example at UTC time Tuesday 10:15, it is Monday 23:15 in American Samoa, which is 11 hours behind UTC, and it is Wednesday 00:15 in Kiritimati, which is 14 hours ahead of UTC. For the first hour (UTC 10:00–10:59), this is true for inhabited territories, whereas during the second hour (UTC 11:00–11:59) it is only true if you count the uninhabited maritime time zone 12 hours behind UTC.

About the “International Date Line” tour: Take a tour from the north pole to the south pole mainly across the enormous pacific ocean. Note the difference on certain parts of the line between the anti meridian and the agreed International Date Line (IDL). The direct distance along the anti meridian from the north to the south pole is roughly 20000 kilometers (12400 miles). If you follow the current agreed IDL it will extend the distance to about 30000 kilometers (18600 miles). This tour will give you a best bid of the placemarks from north to south of where, from east to west and reverse, to set your current date. This tour also outline, around the globe, tracks/path of the five major circles of latitude, the Arctic Circle, Tropic of Cancer, Equator, Tropic of Capricorn and Antarctic Circle and of course the Prime Meridian and the Anti Meridian. You can also find an illustration of the historic date line changes over time as well as the marking of the old and modern prime meridian at the Royal Greenwich Observatory. Tour creator: Tom Kjeldsen, created September 2009. Recommended to be viewed as a ‘Play tour’ in Google Earth with terrain feature enabled.

***** This file is available at ge.dooley.dk  – Have a nice google earth tour… Let’s explore!