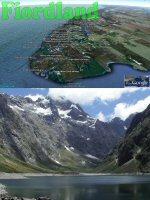 Fiordland is a National Park in south-west New Zealand, where several Fiords, also called Sounds, face the Tasman Sea, surrounded by thousands of feets and meters of steep cliffs, irrigated by many large and small waterfalls surrounded by stunningly beautiful natural formations and botanical growth.

As for animal and plant life, many natural habitats are said to be almost completely unspoilt with massive areas of beech trees and a wide variety of shrubs and ferns and a rich wildlife of insects, reptiles and threatened native bird species such as the flightless takahe and the kiwi.

Among the hundreds of spectacular places and views in the area are the Milford Sound, the track and the road. Some of the tallest and most spectacular waterfalls in the world like Browne Falls, Sutherland Falls, Lady Alice and Helena Falls, Stirling and Lady Bowen Falls can be seen in Fiordland which is a World Heritage Area.

About this “Fiordland tour”: Take a tour and flyover to the 15 major sounds, or more correctly fiords, from their head to their estuary in the Fiordland National Park of New Zealand. Follow the Milford road ending up at the Milford Sound and continue along the Milford track. A tour carved into cliffs and accompanied by high mountains and deep valleys of this scenic area of New Zealand. A selection of the major trekking tracks in the park are outlined as path/tracks. Tour creator: Tom Kjeldsen, created june 2010. Recommended to be viewed as a ‘Play tour’ in Google Earth with terrain feature enabled.