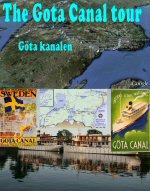 The Gota Canal (Swedish: Göta kanalen) is a Swedish canal constructed in the early 19th century located in Götaland (Gothia, Gothland, Gothenland, Gautland, Geatland), one of the three (unofficial) lands of Sweden. Geographically the waterway is located in the south of Sweden. The Göta Canal was officially opened on 26. September 1832. The original canal stretches from Mem to Sjøtorp. Nowadays the Gota Canal is the common name of the entire waterway and canals from Stockholm to Gothenburg (Swedish: Göteborg), through the major Swedish lakes Vättern and Vänern.

In conjuction with the Swedish archipelago from Stockholm to Mem, the Gota Canal from Mem to Sjøtorp at Lake Vänern and Göta älv and the Trollhätte Canal, a water passage is made possible from the Swedish capital at the Baltic Sea to Gothenburg on the west coast, giving access to the North Atlantic Sea. When the canals and locks was built and designed, one of the reasons was to avoid the Danish Oresund Toll, a paid duty to the Danish Crown from 1429 to 1857 for passing ‘the sound’, the strait that separates Denmark from Sweden.

About the “The Gota Canal tour”: Checkout more than 180 placemarks on the sailing trip from Stockholm to Gothenburg on a cruise through dozens of locks taking you almost 100 meters up and down above sealevel. For a proposed use of low height flyover of the waterway, 3 playable tracks are included in this tour/collection designating the detailed routes from Stockholm to Mem, Mem to Vänern and Vänern to Göteborg. Furthermore a series of Google Streetview links to photos corresponding to placemarks in this tour/collection are supplied when available/located and can be found in the top collection/tour folder description. Tour creator: Tom Kjeldsen, created january 2010. Recommended to be viewed as a ‘Play tour’ in Google Earth with terrain feature enabled.