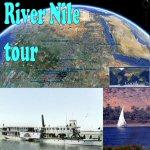 The River Nile, the worlds longest river, is a major north-flowing river in Africa. The Nile River has two major tributaries, the White Nile and the Blue Nile. The Blue Nile are the source of most of the Nile’s water and fertile soil. The White Nile are the longest part of the Nile. All in all, the Nile covers more than 6650 kilometers, 4132 miles from the most distant spring to the vast delta of the combined rivers.

The White Nile rises in the Great Lakes region of central Africa, with the most distant sources in southern Rwanda and northern Burundi. The Nile takes it’s 5 most southern sources of the White Nile from the Rukarara Nile, Nyabarongo Nile, Akanyaru Nile, Ruvyironza Nile and Ruvubu Nile which confluences into the Kagera Nile. The Kagera Nile has it’s estuary into the Victoria lake from the west. The Victoria Nile starts at the northern part of the Victoria lake . Flowing through the Kyogo lake ending up in the Albert lake, the Victoria Nile becomes the Albert Nile at the most northern part of Albert lake. From here, crossing the wetlands and swamps of mid Africa, the Albert Nile changes it’s name to the Bahr al Jabal Nile. Finally in mid Sudan ending up in the Bahr al Abyad Nile.

The Blue Nile rises in the northern part of the horn of Africa in eastern Africa. From the east, the Blue Nile’s spring is the lake Tana. From there the river makes it’s way through the rocky mountain landscape of western Ethiopia and finally joins the White Nile at the city Khartoum in Sudan.

The Flooding of the Nile, an important yearly natural cycle since ancient times mainly in desert areas, has for centuries deposited rich silt on its banks, allowing the habitants along the river, despite the surrounding environment, to grow crops and live along the banks of the Nile.

The name “Nile” originates from Greek “Neilos”, which means valley. Ancient Egyptians called the river Ar or Aur (black) due to the colour of the sediment left after the annual river flooding, caused by melting snow and heavy summer rain in the Ethiopian Mountains of the Blue Nile.

The combined Nile north of the confluence of the White and Blue Nile, near the Sudanese capital Khartoum, flows through the desert in the big bend, the worlds biggest river bend, from Sudan into Egypt. The Northern Sudan Nile and Egyptian Nile features almost countless ancient sites of tempels and pyramids.

The Nile Delta is where the River Nile spreads out and drains into the Mediterranean Sea. It is assumed to be one of the world’s largest river deltas. The Delta is from south to north approximately 160 kilometres (100 miles) in length, from west to east some 240 kilometres (150 miles) of coastline. The delta has today two main distributaries, the Damietta Nile and the Rosetta Nile. In ancient times there were three main rivers, the water of Pre, the water of Ptah and the water of Amun, also named the Pelusiac, the Sebennytic, and the Canopic branches.

About the “River Nile tour”: More than one thousand (1300+) placemarks, in average one every 5,1 km, 3.2 mile, to guide you along the Nile river through or adjacent to the African countries Ethiopia, Zaire, Kenya, Uganda, Tanzania, Rwanda, Burundi, Sudan and Egypt. Don’t forget to check out the folders “Overlays…” with Nile graphic overlays and the “Former Nile / Ancient Flows” outline of the old flows of the Yellow Nile and the Lake Tanganyika Nile. Tour creator: Tom Kjeldsen, created may 2009. Recommended to be viewed as a ‘Play tour’ in Google Earth with terrain feature enabled.