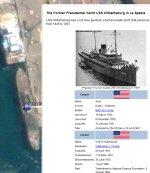 USS Williamsburg was a US Navy gunboat, a former private yacht, that served as a presidential yacht from 1945 to 1953.

Williamsburg remained at Norfolk into November undergoing conversion. The ship then sailed for the Washington Navy Yard where, on November 5, 1945, she relieved Potomac as presidential yacht and, on 10 November 1945, erstwhile gunboat was re-designated AGC-369.

During President Truman’s tenure, she embarked such American and foreign notables as Secretary of State George Marshall, President Miguel Alemán of Mexico; and two successive British Prime Ministers, Winston Churchill and Clement Attlee. During the ship’s first tour as presidential yacht, she cruised the Potomac River and Chesapeake Bay regions, while occasionally venturing into the open sea for cruises to Florida, Bermuda, Cuba, and the Virgin Islands.

President Dwight D. Eisenhower made only one cruise in Williamsburg before ordering her decommissioned. He came on board at Washington on May 14, 1953 and cruised to Yorktown, Virginia, where he disembarked to visit the ship’s namesake, the colonial city of Williamsburg. Re-embarking the Chief Executive at Yorktown later that day, Williamsburg touched at Norfolk, Virginia, and Annapolis, Maryland, before she returned to the Washington Navy Yard to disembark the President on May 18.

That proved to be Williamsburg’s last cruise as a presidential yacht, because President Eisenhower directed that the ship be placed out of commission. Accordingly decommissioned at the Washington Navy Yard on June 30, 1953, she was turned over to the Potomac River Naval Command for maintenance and preservation. Subsequently shifted to Newport, Rhode Island, she remained in “special status” from about April 2, 1959. Williamsburg was struck from the Navy list on April 1, 1962.