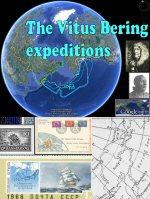 Vitus Bering was a Danish born Russian captain and commander who from 1725-1730 and 1733-1742 leads 2 expeditions from Saint Petersburg across the entire Russian country to investigate the extent of the Russian empire for the Tsar Peter the Great and to determine whether Asia/Russia and North America are connected by land. The 2 expeditions ends up at travelling a basic distance of at least 67800 kilometers / 42130 miles, more than one and a half around the earth. This without including numerous additional supporting exploration tours.

The first expedition leaves Saint Petersburg in 1725 and reaches Okhotsk 3 years later. Two ships “Vostok” and “Fortuna” are build and the Okhotsk sea is crossed to Bolsheretsk on eastern side of the Kamchatka peninsula. The peninsula is crossed along the Kamchatka River where a new settlement, the present Ust-Kamchatsk, is founded. A new ship is being build in 1728 and on the 13th of July the sixty feet long ship “Sankt Gabriel” sails out on the Bering sea along the Russian coast. In August the expedition reaches the northern latitude of 67° 18′, thus discovering the Bering Strait and the Diomede islands. Due to heavy fog the expedition fails to get sight of the low-lying shore of Alaska and North-America.

Back in Saint Petersburg in 1730 Vitus Bering plans an even larger second expedition which take off in February 1733 with 600 men and arrive 7 years later in 1740 to Okhotsk after a land and sailing journey across the entire Russia of more than 6200 miles / 10000 kilometers. Three ships are build and launced into the Okhotsk sea. Only 2 reaches the Avacha Bay in south-eastern Kamchatka, on October 6th where the port of Petropavlovsk is established.

The 2 ships, Bering on the “St. Peter” and captain Chirikov on the “St. Paul”, are departing Petropavlovsk on a South-East course on June 4th 1741. On June 20th, the 2 ships become separated in dense fog and stormy weather and continue their exploration separately.

The “St. Paul” is headed on more southern course and discover Baker island on 15th of july 1741. Other islands like Prince of Wales and Baranof Islands are discovered until lack of water and missing options for making landings forces captain Chirikov to set course back towards Petropavlovsk which “St. Paul” reaches only few days before water supply runs dry.

“St. Peter” makes sight of Mt. St. Elias and Alaska on 16th of july 1741, and 3 days later Saint Elias (now Kayak) island is discovered, named and landing is made. In spite of storms between Aug. 10th and Sept. 6th and severe starvation several islands are discovered like Kodiak and Shumagin.

While heading back towards Kamchatka the expedition is hit by violent storms from Sept. 26th to Oct. 16th. Struggling their way along the Aleutian Islands the “St. Peter” with Vitus Bering lands and become shipwrecked at Bering island in late autumn of 1741 on November 6th. On December 8th Vitus Bering dies on the Island. In April 1742 the surviving 46 of the 77 crew members on “St. Peter” manage to build a vessel and in August cross over to Kamchatka, successfully reaching Avacha Bay.

About “The Vitus Bering expeditions” tour: All tracks and paths are approximations to the actual routes both due to the very vast areas covered and the lack of precise data in addition to almost countless additional sled rides, over land travels, river and sea explorations and preparations for the basic expedition. Tour creator: Tom Kjeldsen, created May 2012.