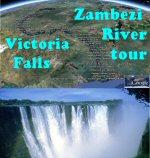 The Zambezi river is the fourth-longest river in Africa, and the largest flowing into the Indian Ocean from Africa. The 3540 km (2200 mile) long river has its source in Zambia and flows through Angola, along the borders of Namibia, Botswana, Zambia, and Zimbabwe, to Mozambique, where it empties into the Indian Ocean.

The Victoria Falls, some of the largest in the world, is one of the most spectacular and beautiful features of the Zambezi river. With a width of 1708 metres (5604 feet) and a height of 108 meters (360 feet), it forms the largest sheet of falling water in the world. It was discovered and named by David Livingstone during his exploration of the African interior in the period 1852-1856. The indigenous name of ‘Mosi-oa-Tunya’ – literally meaning the ‘Smoke that Thunders’ – is also well known. The river’s annual flood season peaks in April with the spray from the falls typically rises to a height of over 400 metres (1300 feet), and sometimes even twice as high. Victoria Falls is a UNESCO World Heritage Site.

The creation of the waterfalls and the current flow of the middle and lower Zambezi river began 200 million years ago when southern Africa was subjected to violent volcanic activity that covered most of the area with lava. As the lava cooled cracks arose, which was subsequently filled with softer soil. Originally the Zambezi River floated into the current southern Shashe and Limpopo rivers, probably from the area around the current Zambezi tributary Chobe River. When the flow into the Limpopo River was blocked, the upper Zambezi River flowed instead into the lava landscape. The water masses eroded the softer soil of the cracks and cut deeper into the softer soil. During 100000 years, a number of cracks eroded backwards. The waterfall pulled back each time, which can be seen on the zigzag-shaped gorges below the fall today. Today’s edition of the Victoria Falls is the eighth version and certainly not the last, since the falls most massive erosion of the area called “Devil’s Cataract” actually is the beginning of the ninth Victoria Falls.

The vast Barotse (Zambezi) Floodplain is one of Africa’s great wetlands, on the Zambezi River in the Western Province of Zambia. It is a designated Ramsar site, regarded as being of high conservation value. Other notable waterfalls along the Zambezi river is the Chavuma Falls at the border between Zambia and Angola, and the Ngonye Falls, near Sioma in Western Zambia. There are two main sources of hydroelectric power on the river. These are the Kariba Dam, which provides power to Zambia and Zimbabwe and the Cahora Bassa Dam in Mozambique which provides power to both Mozambique and South Africa.

About the “Zambezi River and Victoria Falls tour”: Take a tour along the entire Zambezi (also spelled Zambesi) river from the spring and source to the delta at the Indian Ocean. The tour is divided into 4 sections; The Upper Zambezi river, where you’ll discover the source and the wastness of the African wilderness. The Victoria Falls area section gives you spectacular and detailed views of the Victoria Fall and the sections of the fall. Also supplied is the pinpointing of the steep Gorges and Rapids below the falls. The Middle and Lower Zambezi river sections displays with vast National park areas and huge lakes and dams ending up at the river delta at the Indian Ocean. Tour creator: Tom Kjeldsen, created may 2010. Recommended to be viewed as a ‘Play tour’ in Google Earth with terrain feature enabled.