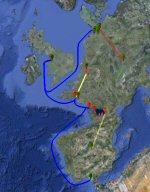 Major structural sections of the A380 are built in France, Germany, Spain, and the United Kingdom. Due to their size, they are brought to the assembly hall (the Jean-Luc Lagardère Plant) in Toulouse in France by surface transportation, though some parts are moved by the A300-600ST Beluga aircraft used in the construction of other Airbus models. Components of the A380 are provided by suppliers from around the world; the five largest contributors, by value, are Rolls-Royce, Safran, United Technologies, General Electric and Goodrich.