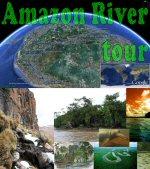 Amazon River, Rio Amazonas – Worlds largest river! Try this extensive tour of more than 6400 kilometers (3977 miles) with more than 500 placemarks (an average of more than one placemark every 13 kilometers, 8 miles) taking you on a flight over the landscape in Peru and Brazil from the Amazon River spring as a glacial stream on a snowcapped 5597 meter (18363 feet) peak called Nevado Mismi in the Peruvian Andes to the estuary, mouth of the river, surrounding the Marajó island, some 330 kilometres (207 miles) wide. Every second the Amazon River pours 219000 cubic meters (57 million gallons, 88 Olympic-size swimming pools, 876 million cups 🙂 of water into the Atlantic ocean! An amount larger than all other major top 10 rivers combined!! And about one-fifth (twenty percent) of the all fresh water that flows into the world’s oceans. During dry season, the river is “only” up to 11 kilometers (7 miles) wide. During the rainy season, the Amazon Basin becomes flooded and the river becomes up to 40 kilometers (25 miles) wide. The Amazon River is the worlds biggest river!

The spring of the Amazon River is the glaciers of the Nevado Mismi mountain in the Peruvian Andes. It flow into the Carhuasanta stream, which flow into the Río Apurímac. Flowing through steep valleys in the high Andes it changes first to the Ene River, then to the Tambo River. Entering the vast flood plains east of the Andes mountains it’s named the Ucayali River which later joins the Marañón River to form the Rio Amazonas. From the triple border between Peru, Colombia and Brazil the river is named Solimões River until it reached the Negro River at Manaus. From here it’s the Amazon River till it reaches the vast estuary at the Atlantic ocean.

About the Google Earth “Amazon River tour”: Although I never (yet) have been in South America, the Amazonas has always been a source of facination for it’s wildlife, rivers and wastness. I may come to Amazonas some day but on a winter day in january 2008 I concluded that I’ll most likely NEVER (guess not many) will travel the more than 6400 kilometers from the spring to the mouth of the river. So I decided I would use Google Earth to give myself (and you, maybe) a guided tour. Also a series of overlays are included. Enable an overlay to see a specific map or information on and around the Amazon river. The ‘Overlays’ folder offers a series of image overlays containing various information on the Amazon river and the surrounding Amazonas rain forest. Have a nice tour! Tour creator: Tom Kjeldsen, created january 2008. Recommended to be viewed as a ‘Play tour’ in Google Earth with terrain feature enabled.