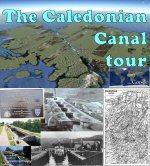 The Caledonian Canal, connecting Inverness to Fort William in Scotland, is 59 miles (94 kilometres) long. 22 miles (35 kilometres) are man-made to connect the natural lochs, of Loch Lochy, Loch Oich, Loch Ness and Loch Dochfour. The canal was opened in 1822. It was constructed to help commercial shipping avoid the treacherous journey around the Scottish west coast.

The Canal follows the Great Glen (Glen Albyn) fault across northern Scotland from the Moray Firth and Inverness at the North Sea in the north east to Loch Linnhe and Fort William at the North Atlantic Ocean in the south west. There are 29 locks, four aqueducts and 10 bridges in the course of the canal.

The building of the canal was planned in 1803 by the canal engineers Thomas Telford and William Jessop. Expected to take seven years to complete, the canal finally opened in 1822, having taken an extra 12 years to complete due to several problems and the difficulties of the construction of the locks, the largest ever built at the time. The Swedish Gota Canal is a sister canal of the Caledonian Canal also constructed by Thomas Telford from 1810-1832 using the most advanced expertise and equipment in the world at that time.

About the “Caledonian Canal-tour”: Take a tour over this canal crossing the Scottish highland connecting the famous lakes, lochs. Also included are 2 paths following the entire canal, one at ground level showing the canal direction, a second above level suitable for playing the path. Recommended to be viewed as a ‘Play tour’ in Google Earth with terrain feature and ‘3D buildings’ layer enabled. Tour creator: Tom Kjeldsen, created july 2011.