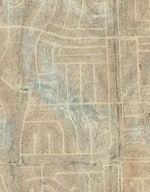 California City had its origins in 1958 when real estate developer and sociology professor Nat Mendelsohn purchased 80,000 acres (320 km2) of Mojave Desert land with the aim of master-planning California’s next great city. He designed his model city, which he hoped would one day rival Los Angeles in size, around a Central Park with a 26-acre (11 ha) artificial lake. Growth did not happen anywhere close to what he expected. To this day a vast grid of crumbling paved roads, intended to lay out residential blocks, extends well beyond the developed area of the city. Satellite photos show how it stakes its claim to being California’s 3rd largest geographic city, 34th largest in the US. California City was incorporated in 1965.