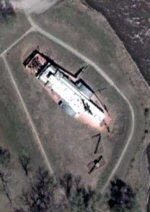 While only half-complete, the Captain Meriwether Lewis dustpan dredge was launched in December 1931 by the U.S. Army Corps of Engineers. The Corps completed construction the following year. The Captain Meriwether Lewis National Historic Landmark is one of the few surviving examples of its type built to control flooding and improve Navigation along the Nation’s rivers.