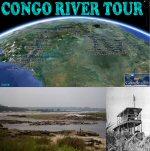 The Congo River. The worlds deepest river, with measured depths beyond 230 meters / 750 feets. So deep and fast flowing, that fish species from one river bank is unable to cross the river, making unique species living and evolving on each side of the river banks in specific areas of the river.

Flowing through the worlds second largest rainforest the 4700 km / 2920 mi long Congo River (former known as Zaire River) is the second largest in the world in terms of water discharge.

The Boyoma Falls (Stanley Falls) and Inga Falls, the most powerful part of Livingstone Falls on the lower course of the Congo river, produces the most powerful and voluminous river waterfalls and cataracts in the world.

The source of the Congo River is the Chambeshi River spring in Zambia, forming the Kasama swamps and floodplain and from Lake Bangweulu flowing into Luapula River, to Lake Mweru, and then into the Luvua River. The other major source is the Lualaba River which originates in most southern part of Congo. The Lualaba River joins the Chambeshi River at the city of Ankoro forming the upper Congo River. The Lukuga River originating from Lake Tanganyika joins the Congo River at Ilunga forming the remaining upper Congo River down to and through the Boyoma Falls (Stanley Falls).

The Congo River at Kisangani marks the start of the Congo River, below it’s upper sources, with all of it’s tributaries. Flowing through vast rainforests and wetlands, the river ends up in the Malebo Pool at the two Congo capitals Kinshasa and Brazzaville, starting a rush downwards through the longest waterfall in the world, the 220 mile / 350 km long Livingstone Falls, including Inga and Yellala Falls.

About the “The Congo River tour”: Take a tour along the entire Congo River with more than 450 placemarks between the various spring rivers and the estuary. Tour creator: Tom Kjeldsen, initial idea December 2011, created January to July 2012. Recommended to be viewed as a ‘Play tour’ in Google Earth with terrain feature enabled.