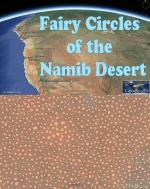 Fairy Circles of the Namib Desert

Fairy circles are small circles in the Namib desert, mostly seen in a belt, a climatic band where it rains between 5-10 centimeters per year, about 150 kilometers from coastline from northern to southern Namibia. They are typically 2-12 meters in diameters and have a lifespan of 30-60 years.

Namibia’s native, called Himba, call the circles “footprints of god”. When their god Mukuru rarely let the rain fall upon the very dry desert, he leaves his footprints in the sand. And they will never disappear, according to Himba. Other people in the area believe it is underground dragons spewing toxic gas from small fissures in the ground, and more recently also started talking about aliens and UFOs…

None of these explanations can hardly stand a more objective investigation. Scientific studies has been ongoing since 1971 and over the years many of the theories has been just as interestingly strange as the ancient old explanations. Fairy circles has been thought to come from; himba tribal dance, meteorites, radioactivity, dizzy ants or dying branches from the cactus ‘live stick’.

Several biologists has since 1994 stuck to termites being the creators of the circles. The reason, why and how, has caused additional explanations, like that termites might fart toxic gases that make the grass die. In 2012 radar recordings showed a moist layer of soil 10 feet below the surface, directly below the circles.

Latest termite hypothesis states that the sand-termit “Silvestri (Psammotermes allocerus)” is using the circle as a water reservoir. It eats the roots from below, making sand bare and extremely porous. When it rains on rare occasions, the water sinks quickly down through the sand, rather than evaporate, and since there not are any plants, it will not transpire through them. Fairy circles are in other words, artificial ponds, which termites build and maintain for decades.

The circle shape is a result of the natural breakdown in the underground, where it nourishes the surrounding grassland outside the rainy season.

The toxic gases measured in and around the circles is also due to termites. The termite stomach contains, as in cows and humans, bacteria that help break down the plants. Although the termite Silvestri, like other termites, prefer death cellulose, it has specialized in chewing living plant roots to maintain the ponds. This provides gas and constipation in the stomach, which may be out by natural means.