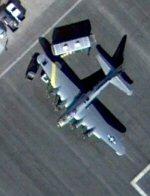 The Liberty Belle is a restored B-17 Flying Fortress that is flown at air shows by the Liberty Foundation.

The B-17G (SN 44-85734) did not see combat in World War II, and was originally sold on June 25, 1947 as scrap to Esperado Mining Co. of Altus, OK, it sold again later that year to Pratt & Whitney for $2,700. Pratt & Whitney operated the B-17 from November 19, 1947 to 1967 as a heavily modified test bed for their P&W T34 turboprop engine under the registration N-5111N. Similar to registration numbers 44-85747 and 44-85813, it became a “5-engine aircraft”, having the powerful prototype engine mounted on the nose. The aircraft was flown “single-engine,” with all four radial engines feathered during test flights. Following the test flights, it was donated to the Connecticut Aeronautical Historic Association, where a tornado on October 3, 1979 blew another aircraft onto the B-17’s mid-section, breaking the fuselage.

B-17 44-85734 was eventually purchased by aviation enthusiast Don Brooks who formed the Liberty Foundation to exhibit the plane as the “Liberty Belle.” Restoration began in 1992 with parts from another damaged B-17 (44-85813). Restoration by Tom Reilly and company/Flying Tigers Warbird Restoration Museum (aka “Bombertown USA”) located at that time at Kissimmee Gateway field Kissimmee, FL. Evidence of the rebuild may be seen in very professional stringer splices aft of the waist gun positions. She returned to the air December 8 2004, and has been touring the air show circuit since then. The Liberty Foundation also planned a historic overseas tour in July 2008 along the northern ferry route to England.