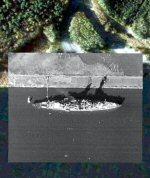 Deutschland (later re-named Lützow), was the lead ship of her class that served in the German Kriegsmarine before and during World War II. The ship was originally classified as a Panzerschiff ("armoured ship") by Germany. The Kriegsmarine reclassified them as a heavy cruisers in February 1940. The British initially nicknamed the three ships of this class "pocket battleships" due to the fact they significantly outgunned the cruisers of any other navy.

The ship was badly damaged by three six-ton Tallboy bombs dropped by the RAF in April 1945, while she laid off Swinemünde, Germany, and she came to rest on the bottom. After repairs, she then continued to provide artillery support of the army. Lützow was finally scuttled by her crew on 4 May 1945.