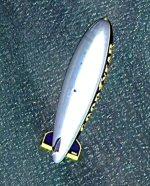 The Goodyear Blimp is the collective name for a fleet of blimps operated by Goodyear Tire and Rubber Company for advertising purposes and for use as a television camera platform for aerial views of sporting events. Goodyear began producing airship envelopes in 1911 and introduced its own blimp, Pilgrim, in 1925.

Designated a GZ (Goodyear-Zeppelin) 20A, the Spirit of Innovation, at 192 feet long, 59.5 feet tall and 50 feet wide, is easy to see as she floats above a football stadium or golf course at 1,500 feet.

The airship also is supported by a crew of 16, two base maintenance personnel and a public relations manager. The crew follows the airship in a bus, 9-passenger van and a 40-foot specially-outfitted tractor-trailer rig.

The Spirit of Innovation was the first Goodyear blimp to be named by the general public through a web-based “name-the-blimp” contest. It is the newest member of the fleet and was christened on June 21, 2006 by Lesa France Kennedy, president of International Speedway Corporation and a member of NASCAR’s Board of Directors, along with Lynn Keegan, wife of Goodyear Chairman and Chief Executive Officer Bob Keegan.