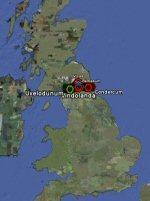 Hadrian’s Wall (Latin: Vallum Aelium – as inferred by text on the Staffordshire Moorlands Patera) is a stone and timber fortification built by the Roman Empire across the width of what is now northern England. Begun in AD 122, during the rule of emperor Hadrian, it was the first of two fortifications built across Great Britain, the second being the Antonine Wall in what is now Scotland. Hadrian’s Wall is the better known of the two because its physical remains are more evident today.