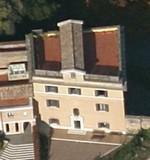 Benedict XVI (Latin: Benedictus XVI; born Joseph Aloisius Ratzinger; 16 April 1927) was the 265th pope, a position in which he served dual roles as the leader of the Catholic Church and Sovereign of the Vatican City State. Benedict XVI was elected on 19 April 2005 in a papal conclave, celebrated his Papal Inauguration Mass on 24 April 2005, and took possession of his cathedral, the Archbasilica of St. John Lateran, on 7 May 2005. A native of Bavaria, he has both German and Vatican citizenship.

He resides in the Mater Ecclesiae Monastery in the Vatican.