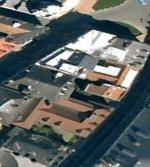 Charles XIV & III John, also Carl John, Swedish and Norwegian: Karl Johan (26 January 1763 – 8 March 1844) was King of Sweden (as Charles XIV John) and King of Norway (as Charles III John) from 1818 until his death. In his family, he was also the first Sovereign Prince of Pontecorvo, in Southern Italy.

He was born Jean Bernadotte, distinguished from a namesake brother by the addition of Baptiste and had the full name of Jean Baptiste Jules Bernadotte by the time Karl also was added upon his Swedish adoption in 1810. He did not use Bernadotte in Sweden but founded the royal dynasty there by that name.

French by birth, Bernadotte served a long career in the French Army. He was appointed as a Marshal of France by Napoleon I, though the two had a turbulent relationship. His service to France ended in 1810, when he was elected the heir to the Swedish throne because the old Swedish royal family was dying out with King Charles XIII.