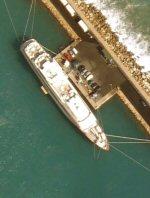 It was originally built as the Nabila for Saudi billionaire, Adnan Khashoggi (named for his daughter). At the time of its construction it was one of the largest yachts in the world.