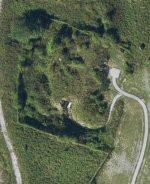 On Peanut Island, near Palm Beach, Florida, a five-minute helicopter ride from the former Kennedy estate, one can imagine life in the atomic age at its most terrifying extreme: when nearly one-eighth of the Strategic Air Command’s nuclear force was airborne and loaded, the nation’s armed forces were on standing five-minute alert under DEFCON2, and anywhere–even the president’s vacation home–was a potential target. In December of 1961 the U.S. Navy Seabees came to this tiny "spoils island"–formed out of dredge material in 1919–to covertly build an emergency fallout shelter for Kennedy and his family.