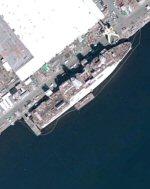 USS Mesa Verde (LPD-19) is the third San Antonio-class amphibious transport dock and the first ship of the United States Navy to be named for Mesa Verde National Park in Colorado. The ship is designed to deliver a fully equipped battalion of up to 800 Marines.

The contract to build her was awarded on 29 February 2000 to Northrop Grumman Ship Systems of Pascagoula, Mississippi, and her keel was laid down on 25 February 2003. She was launched on 19 November 2004, and christened on 15 January 2005 with Linda Price Campbell, wife of former Senator Ben Nighthorse Campbell of Colorado, serving as the ship’s sponsor. The ship was commissioned on 15 December 2007 in Panama City, Florida with its first commanding officer being Commander Shawn W. Lobree of Miami, Florida.