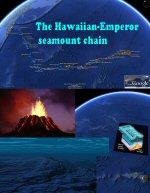 The Hawaiian-Emperor seamount chain is an over and under water mountain chain composed of the Hawaiian Ridge, consisting of the islands of the Hawaiian chain northwest to Kure Atoll, and the Emperor Seamounts, a vast underwater mountain region of seamounts along a line southeast to northwest beneath the northern Pacific Ocean. The seamount chain, containing over 80 identified undersea volcanoes, stretches over 6400 kilometres (4000 miles) from the Kuril-Kamchatka Trench in the far northwest Pacific to the Loihi seamount, the youngest volcano in the chain, which lies about 35 kilometres (22 miles) southeast of the Island of Hawaii. The Hawaiian Islands are that portion of the Hawaiian-Emperor seamount chain that projects above sea level.

The Hawaiian-Emperor seamount chain is a subducting seamount chain on the Pacific tectonic plate, moving at absolute velocity of 8,10 centimeters (3.19 Inches) per year from SE to NW, being subducted beneath the Okhotsk tectonic plate where the plates meets and form the Kuril-Kamchatka Trench. At this point the seamounts end up their more than 80 million years of existence and travel across the Pacific tectonic plate, from their birth as a Shield volcano above the Hawaiian hotspot, now being pressed down into the trench under the Okhotsk plate.

A sharp bend in the chain indicates that the motion of the Pacific Plate abruptly changed about 43 million years ago, as it took a more westerly turn from its earlier northerly direction. Why the Pacific Plate changed direction is not known, but the change may be related in some way to the collision of India into the Asian continent, which began about the same time.

About the “Hawaiian Emperor seamount chain” tour collection: Take this tour displaying more than 80 million years of volcanic activity combined with mountains moving more than 6400 km (4000 mi) along with the tectonic movement. Collection creator: Tom Kjeldsen, ge.dooley.dk, created December 2009. Recommended to be viewed as a ‘Play tour’ in Google Earth with terrain and ocean layer enabled.