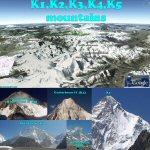 Beyond the famous K2 check out the sisters K1, K3, K4 and K5. Thomas Montgomerie was the member of the team who designated it “K2” for being the second peak of the Karakoram range. Standing on top of Mount Haramukh, 130 miles, 209 kilometers, to the south in 1856, spotting and drawing a sketch of K1 and K2, some 130 miles, 209 kilometers, to the north. Apart from K2 the other peaks originally named K1, K3, K4 and K5, were eventually renamed Masherbrum, Broad Peak, Gasherbrum II and Gasherbrum I respectively. The K2 mountain, the worlds second highest mountain, is commonly known as the hardest mountain in the world to climb. This is due to technical difficulty and objective danger combined with its immense height.

Masherbrum (also known as K1) is the 22nd highest mountain in the world and the 11th highest in Pakistan. It is the highest peak of the Masherbrum range, a subrange of the Karakoram mountains. It is a large and striking peak, which is somewhat overshadowed by the nearby 8000m peaks of the main range of the Karakoram which includes four of the fourteen Eight-thousanders, namely K2, Gasherbrum I, Broad Peak and Gasherbrum II. The meaning of the name “Masherbrum” is not entirely clear. It may come from mashadar (muzzle-loading gun) plus brum (mountain), from the resemblance of the double summit to an old muzzle-loader. It may also come from masha (queen or lady), giving “queen of peaks.” Other meanings have also been suggested. Masherbrum was first climbed in 1960 by George Irving Bell and Willi Unsoeld, part of an American-Pakistani expedition led by Nick Clinch. They succeeded in climbing the southeast face route.

K2 is the second-highest mountain on Earth. It is located in the Karakoram segment of the Himalayan range, on the border between the Gilgit-Baltistan region of Pakistan and the Taxkorgan Tajik Autonomous County of Xinjiang, China. However, those who climb K2 must acquire entry via Pakistan as the Chinese side is inaccessible. An Italian expedition was the first succeeding ascending the summit of K2 via the Abruzzi Spur on 31th of July 1954. The expedition was led by Ardito Desio, although the two climbers who actually reached the top were Lino Lacedelli and Achille Compagnoni.

Broad Peak is part of the Gasherbrum massif on the border of Pakistan-China. It is located about 8 kilometres (5 miles) from K2. Broad Peak was originally named K3 right after the naming of K2 but on closer inspection by a later party, it was discovered that the summit was over 1½ kilometres (1 mile) long, thus “Broad Peak”. The first ascent of Broad Peak was made on June 9, 1957 by Fritz Wintersteller, Marcus Schmuck, Kurt Diemberger, and Hermann Buhl of an Austrian expedition.

Gasherbrum IV and Gasherbrum III is part of and peaks in the Gasherbrum massif. They do not have a original K name. Gasherbrum is referred to as “Shining Wall”, a reference to the highly visible west face of Gasherbrum IV. It more correctly originates from Balti “rgasha” (beautiful) and “brum” (mountain) ie meaning “beautiful mountain”.

Gasherbrum II (also known as K4) is the 13th highest mountain on Earth, located on the border of Pakistan-China. Gasherbrum II is the third highest peak of the Gasherbrum massif, located in the Karakoram range of the Himalaya. The standard route is via the SW ridge as it is relatively free of objective hazards such as ice falls and avalanches. Gasherbrum II was first climbed on July 8, 1956 by Fritz Moravec, Josef Larch and Hans Willenpart of an Austrian expedition.

Gasherbrum I (also known as Hidden Peak or K5) is the 11th highest peak on Earth, located on the border of China-Kashmir. Gasherbrum I is part of the Gasherbrum massif, located in the Karakoram region of the Himalaya. Gasherbrum I was designated K5 (meaning the 5th peak of the Karakoram) by T.G. Montgomery in 1856 when he first spotted the peaks of the Karakoram from more than 200 km away during the Great Trigonometric Survey of India. In 1892, William Martin Conway provided the alternate name, Hidden Peak, in reference to its extreme remoteness. Gasherbrum I was first climbed on July 5, 1958 by Pete Schoening and Andy Kauffman of an eight-man American expedition led by Nicholas B. Clinch. Richard K. Irvin, Tom Nevison, Tom McCormack, Bob Swift and Gil Roberts were also members of the team.

About the Google Earth “K1 K2 K3 K4 K5 mountain” tour: Take a tour of the 5 “K” mountains including the most famous K2 mountain, the second tallest point in the world, located in the vast Karakoram range. View one or several photos of each peak adjusted to combine GE terrain feature with the original photo viewpoint. By using the ‘play tour’ option of GE, combined with the terrain feature enabled, you will get an impression of how Thomas Montgomerie stood on Mount Haramukh back in 1856 and spotted K1 and K2, some 130 miles, 209 kilometers, to the north. See the first drawing and fly from the Montgomerie viewpoint to the closeup of K1 and K2. Tour creator: Tom Kjeldsen, ge.dooley.dk, created April 2008. Recommended to be viewed as a ‘Play tour’ in Google Earth with terrain feature enabled.