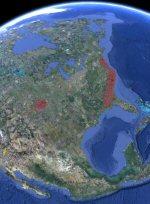 The kml file has placemarks with annotations that function as an index to the ~180 "fields" of bays being researched. This was done to minimize the memory hit from the collection of LiDAR images being used. Each placemark’s pop-up presents a small jpg of the LiDAR image, and has a link to the actual LiDAR data as a network-linked kmz file. The LiDAR imagery was created in Global Mapper, using their KML generation output feature, and typically contains several levels of increasingly-higher resolution imagery, revealed as the user zooms in. They are big, several are over 10 MB.

Also included in each field’s specific kml file ( available from the pop-up) are path elements as "trajectories" describing predicted bay orientations, and walk-back triangulation suggestions. Overlays are included to highlight bay geometries and to aid the user in selecting his or her interpretation of the bays’ orientations in that region. The "bearing Grid" overlay can be copied by the user and pasted into my on-line java kml calculator to generate updated trajectory predictions. The calculator can also be used to generate orientation predictions from a placemark created by a user in the center of a previously-identified Carolina bay.

Please note that we don’t view the bays as either primary impact crater, nor as craters created by secondary impacts, but rather as surface features of in a thick sheet of distal ejecta sand.